Elissa used to have it all: looks, popularity, and a bright future. But for the last three years, she’s been struggling with terrifying visions, phantom pains, and mysterious bruises that appear out of nowhere.

Finally, she’s promised a cure: minor surgery to burn out the overactive area of her brain. But on the eve of the procedure, she discovers the shocking truth behind her hallucinations: she’s been seeing the world through another girl’s eyes.

Elissa follows her visions, and finds a battered, broken girl on the run. A girl—Lin—who looks exactly like Elissa, down to the matching bruises. The twin sister she never knew existed.

Now, Elissa and Lin are on the run from a government who will stop at nothing to reclaim Lin and protect the dangerous secrets she could expose—secrets that would shake the very foundation of their world.


Recommended for fans of: YA Sci-fi


I love me some YA sci-fi, and this was had everything a geek girl like me could want! Futuristic? Check. Space ships? Check.  Kick-ass heroine? Double Check. The world-building was fantastic, I loved the back-story that Howson wove throughout. The pacing was great, propelling you through the pages. I liked how LINKED had not one, but two characters that grew throughout the story. The plot twists and turns will keep you hooked. I also liked the bigger issues the book addresses. It will get you thinking about personal freedom and individual duty.


LINKED is now available for pre-order and releases June 11th.
Posted by Demitria at 1:02 PM 7 comments:

When Native American Fredricka ‘Fred’ Oday is invited to become the only girl on the school’s golf team, she can’t say no. This is an opportunity to shine, win a scholarship and go to university, something no one in her family has done.

But Fred’s presence on the team isn’t exactly welcome — especially not to rich golden boy Ryan Berenger, whose best friend was kicked off the team to make a spot for Fred.


Recommended for fan of: YA contemporary with substance


It seems from the cover and the summary that this book would be ultra-smooshy, but it’s not. Fred faces some issues, including a very real social divide: she’s poor and lives on the “Rez.” She feels out of place being on the golf team, not only because she’s the only girl, but because she’s the only Native American. I loved Fred’s character, she was genuine and likeable. The alternating perspectives also make it easy to see Ryan’s thought…and not dislike him. He has to deal with a whole other set of issues, including living up to expectations and social norms. A fantastic contemporary debut that addresses bigger issues, while not getting completely lost in them.


HOOKED is out tomorrow!
Posted by Demitria at 1:02 PM 9 comments:

Here are the numbers of Ann Galardi’s life:

Welcome to the world of informercial diet plans, wedding dance lessons, embarrassing run-ins with the cutest guy Ann’s ever seen—-and some surprises about her NOT-so-perfect mother.

And there’s one more thing. It’s all about feeling comfortable in your own skin-—no matter how you add it up!


Recommended for fans of: YA Contemporary


This book really hit home. It’s not just for teens that have struggled with their weight, but for anyone who has ever had a problem in life they felt they had no control over. Ann’s just happens to be her weight. She thinks that all of her troubles will be solved if she can just lose 45 pounds. Even with the low self esteem, she’s a very likeable MC, easy to relate to. She’s also a bit clueless. I love how Ann’s character develops throughout the book, as she learns more about herself, her friends, and her family. She discovers that she’s not as alone in her struggles as she thought. A very satisfying read!


45 POUNDS (MORE OR LESS) is now available for preorder and will be released July 11th.
Posted by Demitria at 12:08 PM 6 comments:

Early IN THE AFTER feedback

I recently added a "reviews" tab to the blog. Soon they'll be reviews from all kinds of sources, but right now it's early reader reviews on Goodreads! These are all for my Uncorrected Advanced Copies. Take a look. So far so good! 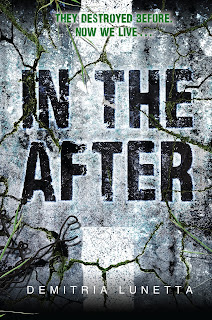 I'm also lucky enough to read a ton of ARCs for other authors debuting in 2013. Over the next few weeks I'll be highlighting these, which include Ya Contemporary, Sci-fi, & Paranormal, each with a dash of something special. So check back Mondays, Wednesdays, Fridays over the next few weeks to find out about these soon to be available books!

I know it's Wednesday, so any 2013 debuts people are waiting on?

Email ThisBlogThis!Share to TwitterShare to FacebookShare to Pinterest
Labels: Class of 2K13, In the After, The Lucky 13s

First it was SLUT scribbled all over Lizzie Hart’s locker.

Lizzie’s reputation is destroyed when she's caught in bed with her best friend’s boyfriend on prom night. With the whole school turned against her, and Angie not speaking to her, Lizzie takes her own life. But someone isn’t letting her go quietly. As graffiti and photocopies of Lizzie’s diary plaster the school, Angie begins a relentless investigation into who, exactly, made Lizzie feel she didn’t deserve to keep living. And while she claims she simply wants to punish Lizzie’s tormentors, Angie's own anguish over abandoning her best friend will drive her deep into the dark, twisted side of Verity High—and she might not be able to pull herself back out.

Recommended for fans of: Edgy YA Contemporary

THE S-WORD deals with a lot of issues including suicide, homosexuality, sex, bullying, and unequal gender perceptions (like how a girl will be called a slut while a guy will be called a stud). I love how complicated the characters are, just like in real life, these teens were not cookie cutter versions of a teen. They had problems, but each character had their own set of problems, some of which overlapped. I applaud Pitcher’s ability to give each character depth.


Angie, the MC is a mess, but understandably so. Her pain feels real as you experience life after Lizzie with her. She’s not always sympathetic, but she’s not meant to be. She’s a person who has to deal with a lot and somehow comes out in the end better for it.


THE S-WORD is available now for pre-order and will be release May 7th.

IN THE AFTER ARC Giveaway

Want to win an IN THE AFTER advanced copy? Of course you do! Luckily there’s a giveaway going on now at YA Books Central. Not only could you win a copy of my book, but also a copy of ANOTHER LITTLE PIECE by my awesome Harper Teen buddy, Kate Karyus Quinn.

Click the link and check it out!
Posted by Demitria at 8:00 AM 3 comments:

Email ThisBlogThis!Share to TwitterShare to FacebookShare to Pinterest
Labels: Class of 2K13, Giveaway, HarperTeen, In the After, The Lucky 13s

I read a lot of  great books in 2012, though I have to admit I read more 2013 ARCs than anything else. But now I’ve got an awesome new e-reader and I need some books to fill it up! So help me out…

Sixteen-year-old Dusty Everhart breaks into houses late at night, but not because she’s a criminal. No, she’s a Nightmare.

Being the only Nightmare at Arkwell Academy, a boarding school for magickind, and living in the shadow of her mother’s infamy, is hard enough. But when Dusty sneaks into Eli Booker’s house, things get a whole lot more complicated. He’s hot, which means sitting on his chest and invading his dreams couldn’t get much more embarrassing. But it does. Eli is dreaming of a murder.

Now Dusty has to follow the clues—both within Eli’s dreams and out of them—to stop the killer before more people turn up dead. And before the killer learns what she’s up to and marks her as the next target.


Recommended for fans of: YA Paranormal with a dash of Romance


THE NIGHTMARE AFFAIR is a very unique take on a “paranormal school” theme. I really loved the world-building in this book. Everything feels very real…from Arkwell Academy to the dreams that Dusty and Eli share. Information unfolds naturally, putting you right in the various scenes. Sometimes stories with various kinds of magical beings bog you down with too much info, or frustrate you with too little, but this book walked the line perfectly. I also liked the way the mystery unfolds, it keeps you guessing…and turning the pages.


THE NIGHTMARE AFFAIR is now available for pre-order and releases March 5th.

THE CADET OF TILDOR Release Tomorrow! 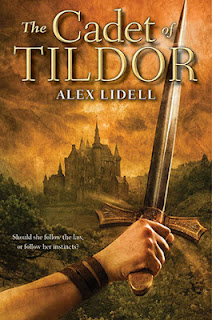 So the very first Class of 2K13 author to release this year is Alex Lidell, with her YA fantasy, the CADET OF TILDOR!

Here's a review I wrote a while back after reading an advanced copy:

This is the best fantasy novel I’ve read in a while. It has all the things you’d expect from a good fantasy, mages, sword fights, royal intrigue, and plenty of plot twists. It also has a kick-ass MC, Renee. What sets it apart for me is that Renee has flaws, which makes her relatable to the reader. In the beginning of the book, she’s stubborn and willful and only sees the world in black and white. This allows for her character to grow through the book, giving her depth. She never loses her willfulness, but begins to see the complexities of her situation and begins to understand that not everything is black and white. I love when an MC not only goes on a journey, but also grows as a character.


I also found the lack of romance refreshing. That’s not to say the Renee isn’t attracted to good looking men (she is sixteen after all) but the plot doesn’t fall into the all too common YA romance formula. I also like how Renee wants to be treated like her male counterparts, and ultimately is, including being trained, bruised, and battered.
If you want to check out more reviews, THE CADET OF TILDOR is on Goodreads. You can also enter to win a giveaway!
THE CADET OF TILDOR releases tomorrow, Jan 10th!

So 2012 was pretty awesome. I finished writing IN THE AFTER, wrote a first draft of book 2, plotted out a 1.5 novella, joined two awesome writers groups, and in non-author related stuff, got married!


But 2013 should be twice as great. My book is out June 25th and I don’t think anything can beat that (ummm…don’t tell my husband I said that J )


As a debut author, I get to read a lot of ARCs…books that won’t hit the shelf until later this year and a few that will be out very soon (more on that on Wednesday.) So I can’t really do a looking forward to debut list, because I’ve read so many I was looking forward to.


A few new books in a series that I’m psyched for are:

Email ThisBlogThis!Share to TwitterShare to FacebookShare to Pinterest
Labels: Class of 2K13, Editing, In the After, The Lucky 13s, Writing
Newer Posts Older Posts Home
Subscribe to: Posts (Atom)