Books I Love – Zombies vs. Unicorns 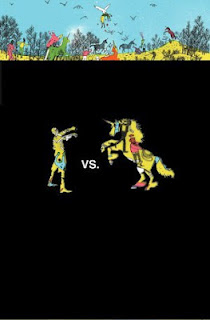 It's a question as old as time itself: which is better, the zombie or the unicorn? In this anthology, edited by Holly Black and Justine Larbalestier (unicorn and zombie, respectively), strong arguments are made for both sides in the form of short stories. Half of the stories portray the strengths—for good and evil—of unicorns and half show the good (and really, really bad-ass) side of zombies. Contributors include many bestselling teen authors, including Cassandra Clare, Libba Bray, Maureen Johnson, Meg Cabot, Scott Westerfeld, and Margo Lanagan. This anthology will have everyone asking: Team Zombie or Team Unicorn?
This book is old news to a lot of you, but that doesn’t make it any less awesome. I actually got it in 2010 for Christmas…and promptly misplaced it until this weekend. I read it all in one night and loved it! There’s something for everyone in here, whether you love zombies, unicorns, or both.
I’m a zombie girl and my two favorite stories are:
Bourgainvillea by Carrie Ryan
The Children of the Revolution by Maureen Johnson
If you haven’t read this one, pick it up. If you have, what were your favorite stories?
Posted by Demitria at 12:08 PM 10 comments: