Thirteen-year-old Habo has always been different— light eyes, yellow hair and white skin. Not the good brown skin his family has and not the white skin of tourists. Habo is strange and alone. His father, unable to accept Habo, abandons the family; his mother can scarcely look at him. His brothers are cruel and the other children never invite him to play. Only his sister Asu loves him well. But even Asu can’t take the sting away when the family is forced from their small Tanzanian village, and Habo knows he is to blame.

Seeking refuge in Mwanza, Habo and his family journey across the Serengeti. His aunt is glad to open her home until she sees Habo for the first time, and then she is only afraid. Suddenly, Habo has a new word for himself: Albino. But they hunt Albinos in Mwanza because Albino body parts are thought to bring good luck. And soon Habo is being hunted by a fearsome man with a machete.

To survive, Habo must not only run but find a way to love and accept himself.


Recommended for fans of: YA or MG Contemporary with Substance/ African Culture


This book is amazing. Sullivan has clearly done extensive research on Albinos living in Tanzania. You are immersed in African culture, but you always feel like you belong there. Everything feels very authentic and accurate. It speak from a place that is more than just intellectually though, GOLDEN BOY feels so genuine. You feel stricken when the family is forced to leave their home, just as Habo does. You also get to go on a journey with him as he learns about his condition and begins to grow as a person. I think anyone who has ever felt different can connect with Habo as a MC. GOLDEN BOY definitely deserves the starred Kirkus review it received.


GOLDEN BOY is available for pre-order and will be released on June 27th.
Back Wednesday with the Kirkus review of IN THE AFTER!
Posted by Demitria at 6:00 AM 8 comments:

Tomorrow marks two months until IN THE AFTER releases! I am so freaking excited! Here's the countdown widget and don't forget to enter this month's ARC giveaway!

Email ThisBlogThis!Share to TwitterShare to FacebookShare to Pinterest
Labels: In the After

Violence and Cursing and Sex, Oh My!

Today over at the 2K13 blog I'm addressing the levels of "bad things" in IN THE AFTER. Head over and check it out...then enter my April Giveaway here on my blog. I'll also be manning the 2K13 twitter account so stop by @TheClassof2K13!

Back Wednesday with another ARC Spotlight!
Posted by Demitria at 6:00 AM 8 comments:

Email ThisBlogThis!Share to TwitterShare to FacebookShare to Pinterest
Labels: Class of 2K13, In the After

The Blog Chain topic this week is:


Have you developed thick skin as a writer? How do you handle having your work critiqued? Do you love revising? Hate it?


Any writer knows: Writing is editing. It’s very difficult to be a writer if you’re unable to handle critiques. It isn’t always easy. There may be a part of your story that you absolutely love, but no one else seems to. Writing is a fluid process. You can’t plop a lump of clay down on the table and call it art, unless of course you’re a postmodernist. J You have to be able to mold your plot and characters. And that’s where critiquing comes in.


It’s always a little strange to have someone tell you what’s not working with something you’ve poured your heart and soul in to. At the same time, you need an outsider to look at it objectively (or as objectively as a human can). When my editor gives me notes, 95% of the time I think, “Why didn’t I see that?” or “Yes. I understand now!”


I love revising. Taking the lump of clay metaphor a bit further, it’s like working at home on molding that clay and it somehow ends up an ashtray…or maybe a really nice paperweight. That’s fine and dandy, but not spectacular. Then someone comes in, takes a look, points out the flaws and all of a sudden it snaps in to place. A pinch here, a tuck there and all of a sudden you have sculpture. It becomes better than “just really nice.” It becomes art.


That’s my take…now I feel like I should take some ceramics classes. What about you? How do you deal with critiques?
Keep following this topic on the chain and check out Michelle’s blog on Monday, or look back at Katrina's post from yesterday.
Posted by Demitria at 5:53 AM 12 comments:

Email ThisBlogThis!Share to TwitterShare to FacebookShare to Pinterest
Labels: Editing, The Blog Chain

ARC Spotlight – THE KEY & THE FLAME by Claire M. Caterer

Eleven-year-old Holly Shepard wants nothing more than to seek adventure outside of her humdrum American life. She gets her chance at last when her family travels to England and Holly receives an unusual gift: an iron key that unlocks a passage to the dangerous kingdom of Anglielle, where magic is outlawed and those who practice magic are hunted. When her friend Everett and brother Ben are captured by Anglielle’s ruthless king, Holly must rescue them. But that means finding—and using—the magic within herself and learning which magical allies she can trust.


Recommended for fans of: MG Fantasy


Any child who loves fantasy will love this book. There’s a definite nod to the Narnia books, but Caterer makes Anglielle wonderfully unique. The POV changes from the smart, plucky Holly to the conflicted Everett, which gives the story more depth, as Everett isn’t exactly the perfect hero. I really like how Holly is untrusting at first, unsure of who is on her side, instead of taking giant leaps of faith common in MG Fantasy. The end also leaves the series wide open and makes you eager to read the next book.
Though I read an advance copy, THE KEY & THE FLAME is available now!

Back Friday with another Blog Chain post about developing thick skin as a writer!
Posted by Demitria at 10:45 AM 7 comments:

ARC Spotlight – IN THE SHADOW OF BLACKBIRDS by Cat Winters

In 1918, the world seems on the verge of apocalypse. Americans roam the streets in gauze masks to ward off the deadly Spanish influenza, and the government ships young men to the front lines of a brutal war, creating an atmosphere of fear and confusion. Sixteen-year-old Mary Shelley Black watches as desperate mourners flock to séances and spirit photographers for comfort, but she herself has never believed in ghosts. During her bleakest moment, however, she’s forced to rethink her entire way of looking at life and death, for her first love—a boy who died in battle—returns in spirit form. But what does he want from her?


Recommended for fans of: YA Historical, Paranormal, Gothic Horror


As much as I talk about my love for Sci-fi & Fantasy, almost equal is my love of Historical Fiction. I’m very curious about history and though historical fiction is not always 100% accurate, it pulls you into the past, allowing you to glimpse how life might have been.


IN THE SHADOW OF BLACKBIRDS is an amazing YA Historical. It captures the uncertainty and horror of living in America during WWI, especially for those who have loved ones fighting overseas. In addition is the constant fear of contracting the Spanish Flu, a very real daily threat. As if the real life horrors aren’t frightening enough, Winters expertly weaves through the plot the spiritualist beliefs of the time, séances and ghost photography. Winters also creates an extremely relatable MC in Mary Shelley, a science minded young woman who is forced to face the fact that the spirit world may exist. I highly recommend this ghost tale set during WWI. Also, check out the awesomely eerie cover!


Although I read an Advance Copy, IN THE SHADOW OF BLACKBIRDS is out now!


Back Wednesday with another ARC Spotlight.

IN THE AFTER - April ARC Giveaway

a Rafflecopter giveaway
Posted by Demitria at 6:00 AM 21 comments:

Email ThisBlogThis!Share to TwitterShare to FacebookShare to Pinterest
Labels: Giveaway, In the After

In a magical kingdom where your name is your destiny, 12-year-old Rump is the butt of everyone's joke.

But when he finds an old spinning wheel, his luck seems to change. Rump discovers he has a gift for spinning straw into gold—as much gold as he wants! His best friend, Red Riding Hood, warns him that magic is dangerous, and she’s right. With each thread he spins, he weaves himself deeper into a curse.

To break the spell, Rump must go on a perilous quest, fighting off pixies, trolls, poison apples, and a wickedly foolish queen. The odds are against him, but with courage and friendship—and a cheeky sense of humor—he just might triumph in the end.


I love books in which we see the story told from the “villain's” perspective, and Shurtliff does an amazing job with RUMP. Rump really isn’t a villain at all, just a boy tangled in magic who must gain the confidence he needs to get himself out of his bad situation. Kids will love the humor and adults will enjoy the wit. I can definitely relate to Rump and his anxiety over his strange name. I also like the message that we are each in charge of our own destinies. I highly recommend this fairy tale fantasy adventure!


RUMP: THE TRUE STORY OF RUMPLESTILTSKIN is out tomorrow, April 9th
I'll be back Wednesday with another giveaway!
Posted by Demitria at 10:12 AM 11 comments:

VENGEANCE BOUND releases tomorrow, here's a copy of a review I posted way back when I read the ARC. 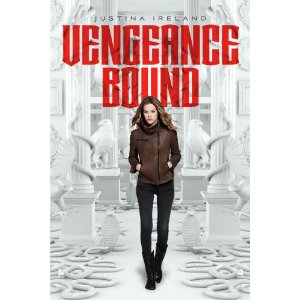 The Goddess Test meets Dexter in an edgy, compelling debut about one teen’s quest for revenge…no matter how far it takes her.


Cory Graff is not alone in her head. Bound to a deal of desperation made when she was a child, Cory’s mind houses the Furies—the hawk and the serpent—lingering always, waiting for her to satisfy their bloodlust. After escaping the asylum where she was trapped for years, Cory knows how to keep the Furies quiet. By day, she lives a normal life, but by night, she tracks down targets the Furies send her way. And she brings down Justice upon them.


Cory’s perfected her system of survival, but when she meets a mysterious boy named Niko at her new school, she can’t figure out how she feels about him. For the first time, the Furies are quiet in her head around a guy. But does this mean that Cory’s finally found someone who she can trust, or are there greater factors at work? As Cory’s mind becomes a battlefield, with the Furies fighting for control, Cory will have to put everything on the line to hold on to what she’s worked so hard to build.


I loved this book! It’s edgy with a kick-ass main character…who has some serious issues. The story is well-paced, unfolding with just enough information to keep you reading, because you just have to know what happens. It’s also interesting how conflicted the main character is, unsure if the voices in her head are echoing the horrible things she wants to do, or making her do those things.


Vengeance Bound is out Tomorrow!